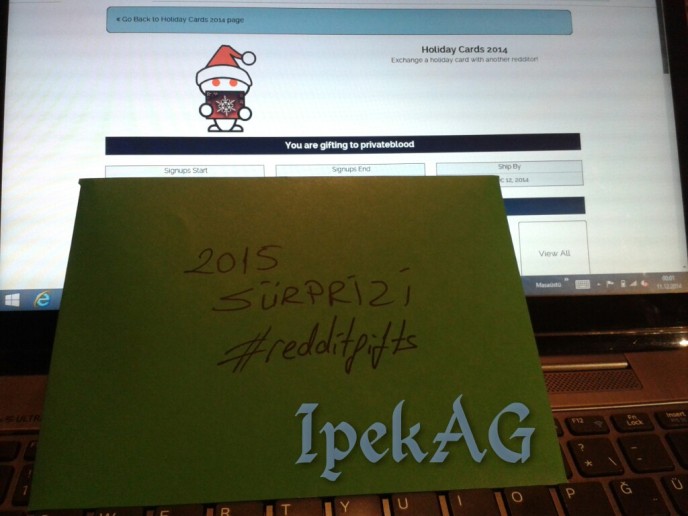 “First of all, I have the note that I DEFINITELY was NOT expecting this. I wasn’t even aware there was going to be a holiday card exchange, as I had already participated in the Secret Santa 2014 and sent my gift.

Then, it all became real when last friday I got the update notification that my secret santa sent me a package with a private cargo company. (Which seemed weird, in the end; it was just holiday cards that we were to exchange, right? Right?) I got excited all of a sudden and started to wait anxiously to get my gift on Saturday. But the company made a delay and I had to wait till today, Monday.

It was an ordinary morning, and I was preparing for my class at university in the afternoon. I had waken up early to check about the status of my gift and had called to company, and they told me it is en route, but they said they can’t give an exact time when will they deliver it; even though I told them I will not be home in afternoon, it didn’t matter to them. That was a bit of a frustration.

But then; about half an hour after I hung up the phone, the door rang and it had to be this “card” I was waiting for. Well, to man up, I have to say, I got so emotional, and I almost cried. It was apparent from the size of the package that it was NOT just a card, but after seeing the card, that would be enough. It was so beatifully designed and presented. I really never got any gift that I liked this much, all my life.

But there was another little thing: a HUGE comic book with a material that got me hooked the moment I unwrapped it. I just LOVED the fact that my Secret Santa had really looked through my redditgifts profile and selected an amazing gift.

THANKS FOR DOING THIS, FOR REAL!

ALL THE BEST WISHES!” 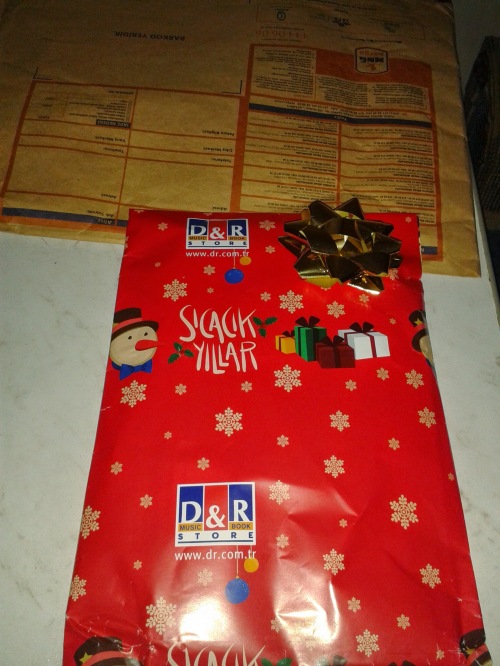 “SURPRISE!!! Mr privateblood you not only made my day but my entire week I guess. This was the least expected thing. My giftee happens to be my gifter. What a luck! He has sent me TWO new years card, a beautiful cd of Morrisette (the latest one of course.) I will be listening it first time, that is a shame for me.

I called him to thank and he was a bit shocked to hear from me. Also he got more shocked when I told him that the present he got was from me, it was awesome to break the news ‘couse he didn’t realised this yet!!!

Your generousity is as beautiful as your cards, and I am thankful for this exchange thing. Nice to meet you, nicer to have you as a new friend.